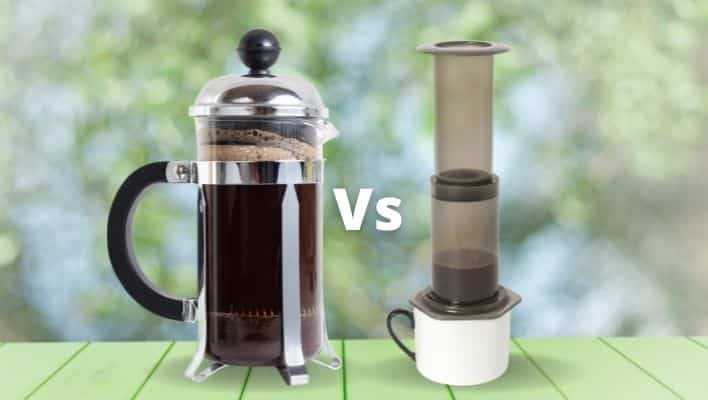 If you’ve gone on the internet to research your coffee options, you’ve probably stumbled across a couple of things. First, you’ll see a plethora of AeroPress vs French Press comparisons, but you’ll also see a ton of arguments suggesting that one coffee maker is better than another.

So, you’ve been thinking about trying the AeroPress? Or maybe you’ve been meaning to get into the French Press but aren’t sure how to get started.

I’ve recently seen a lot of debate over whether the AeroPress or the French Press is the superior option. So, how do they stack up? What are their results? Which is the ideal option? I’ve been using them at home for a while now, so I thought I’d share some inside scoop with you.

All about French Press

The French press is basically a coffee plunger formed of a beaker with a metal lid attached to a filter. It’s a famous manual coffee maker known by different names worldwide, including Coffee Press, Cafetière, and Press Pot.

The modern French press was patented in 1929 by Italian designer Attilio Calimani, but it is claimed to have been invented by Frenchmen in the middle of the 19th century (1852).

This simple coffee brewing method involves placing a measured coffee ground inside a beaker, pouring boiling water over it, and stirring gently with a stick or spoon. For extracting all of the essence and oil from the coffee grounds, it is left upright for 4-5 minutes. After that, the plunger is pushed down to separate all ground particles from the beverage. French press brewing is well known for producing full-flavored coffee because it contains all of the essential acids and oils found in coffee beans.

How To Brew Coffee With A French Press

Six Simple Steps To Brew Coffee With A French Press:

1. Add measured coarsely ground coffee into the beaker and stir

2. Fill the pot with water that is just about to boil and stir gently using a plastic or wooden spoon.

3. On top of the glass carafe, place the filter lid.

6. Pour coffee into the cup to serve.

The Aeropress is a relatively new invention, invented by American inventor Alan Adler in 2005. The device is now quite popular among coffee enthusiasts and baristas worldwide for its versatility, durability, and lightweight. It’s a fantastic coffee brewer designed following the French Press concept but using another technology. It’s a total-immersion brewing technology that can produce full-flavored coffee.

Aeropress is typically a cylindrical tube with a plunger that creates air pressure to push hot water through the coffee ground. This manual coffee maker can brew one cup of coffee at a time, and usually, coffee is brewed by placing it directly on the top of a sturdy mug.

You can use it to brew American coffee as well as espresso. Although it is not like authentic espresso, it is very effective in brewing a super-strong coffee.

How To Brew coffee with an AeroPress:

The brewing method of the AeroPress is quite unique, and it is usually done in one of two ways. The Standard method is the most common, and members of the coffee community created the Inverted method.

With AeroPress, this is the standard method to brew a perfect cup of espresso (Not real Espspresso) or American coffee. In the inverted method, coffee and water are filled by standing it upside down on the plunger. It is then flipped over the cup to press the plunger.

You can also control the strength of your coffee by adjusting the amount of ground coffee, water temperature, and the steeping duration, as in the French press. This brewing method is becoming so popular that, since 2008, the World AeroPress Championship has been held every year to compete for the best AeroPress coffee.

Which one is the best: French Press Vs AeroPress

By now, I’m sure you’ve learned everything there is to know about these two famous coffee makers! Each gadget is travel-friendly and has some common features, but I’ll compare them based on the simplicity of use, brewing time, and coffee quality. Indeed, this will make it much easier to figure out which one is best for you.

It takes some practice to produce a great cup of coffee using the French press, but it’s not difficult once you get the idea of it. It’s straightforward to clean, and the steel filter doesn’t need to be replaced. The French press also lets you make multiple cups of drinks at the same time.

On the other hand, the Aeropress brewing process is likewise exceedingly smooth and straightforward. It takes a few more steps than brewing in a French press, but it has a measuring scoop and water level marks in the chamber, making the procedure much more accessible. Aeropress is also very easy to clean; it has a unique feature that removes the used coffee ground with the microfilter. Although it has to use a microfilter every time, it is not very expensive.

AeroPress is ahead in this analysis because it has less hassle to clean due to its unique features and is also less likely to be mistaken for making a great cup of coffee.

The French press’s coffee-making takes at least five minutes or more from start to finish. After pouring coffee ground and boiling water in the beaker, stir for at least 30 seconds. Then put the lid on and keep it upright for four minutes to remove all the oil and extract it from the coffee ground. French Press Brewing may be for you if you want to enjoy the coffee brewing process for a long time.

Inevitably, brewing with an AeroPress takes far less time than brewing with a french press; after pouring coffee ground and hot water inside the coffee chamber, stir for 10 seconds. The plunger is then gently pushed downwards.

Considering the brewing duration, AeroPress will win because it can make up to four cups of American coffee in just one and a half minutes.

At French Press Brewing, you will always find a strong and full flavored coffee that is almost impossible in any other way. Nearly all the ingredients present in the coffee bean come out in this method. If you keep it straight for more than a certain period, your drink may taste bitter. Again, the size of the coffee grind for the French press needs to select correctly. If you use a fine grind size, sediment will accumulate in your coffee because its metal filter will not filter the fine coffee particles. So coarse coffee ground is recommended for French Press.

AeroPress always provides strong coffee with reduced bitterness since the coffee ground is infused in a short time and extracted rapidly by applying pressure, so there is less chance of bitterness. Also, since there is no steeping time in AeroPress, your coffee is not likely to be oily, so AeroPress will be best for you if you do not like oily coffee.

It is difficult to say which one is the best because it will ultimately depend on the individual’s choice. Practically every method produces full-flavored coffee, and you can control their strength in both brewing. In reality, if you prefer full-flavored oil-free coffee, AeroPress is the way to go, whereas French Press is perfect if you like a full-bodied oily coffee.

At a glance French Press Vs AeroPress

Ans.: Certainly not! AeroPress is similar to an espresso machine because it uses air pressure to extract flavors from the coffee grounds. It uses fine coffee ground and takes only 1-1.5 minutes to complete the total brewing cycle. As well as in French press brewing, the flavor is extracted from the coffee ground by steeping for 4-5 minutes. Moreover, it uses the coarse ground as its metallic filter cannot filter fine particles.

Ans.: The brewing period of the AeroPress is surprisingly quick, at 1-1.5 minutes, compared to the French press and many other coffee makers. Water extracts a tiny quantity of bitterness and acidity from the coffee ground for a short period of time. As a result, coffee brewed in an AeroPress is always less acidic and free of bitterness.

Ans.: AeroPress is an excellent option if you regularly travel, drink condensed coffee frequently, and have a tight budget. This brewer is, in fact, affordable, quite user-friendly, and simple to clean. It is light in weight and small, making it simple to carry on travel.

Ans.: In a word, no. The Aeropress is incapable of producing real espresso. It isn’t an actual hand-operated espresso machine.

In my observation, AeroPress wins for convenience, taste, and portability. It is definitely the better option for most people looking for an easy-brewing cup of coffee. Of course, the taste is subjective, and if you have a taste for total immersion brewing, the French Press might be for you. In conclusion, the AeroPress, which uses air pressure to force the coffee through a filter, brews a rich, uniform cup. The real difference is that the AeroPress forces the water through the grounds at a quicker pace, while a French Press immerses the grounds in water for a longer period of time, so the difference really is one of speed vs. immersion.