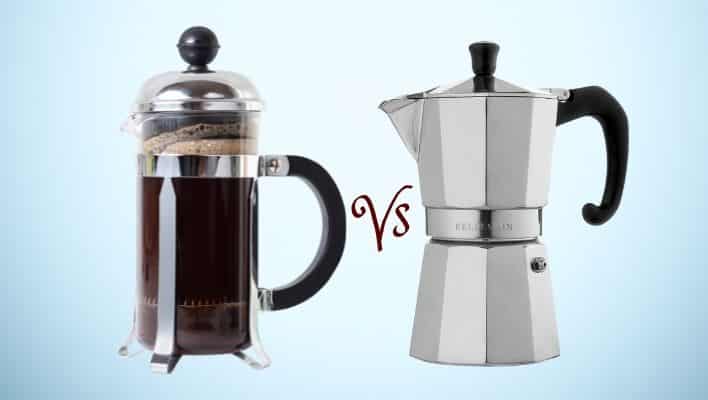 I’m back with another quick article “French Press vs Moka Pot” to help you pick the best coffee brewing method. The French press and Moka pot are both great ways to make a delicious cup of joe, but I’ll be discussing which one would work better for your needs. Let’s jump right in.

No matter what type of coffee you like, it’s important to be able to make your favorite beverage at home. Whether you prefer the rich taste of an espresso or the smooth flavor of a latte, there are plenty of different brewing methods out there that can help bring out the best in your beans. To help you decide which type is right for you, I’ve put together this comprehensive guide on French Press vs Moka Pot!

The French press and the Moka pot are two different methods of making coffee.  French presses use a plunger to push ground coffee beans down to the bottom of a container where they steep for 4-5 minutes before being poured out into cups or glasses. The Moka pot has three chambers: one at the bottom filled with water, another which holds steam which bubbles up through coffee grounds held in another chamber above it, and finally an uppermost chamber where brewed coffee is collected as it drips from its perforated metal filter.

Now, I’m going to compare the Moka pot and French press in terms of performance and ease of use. You’ll be able to see which one is more convenient for you (based on your daily caffeine habit) as well!

Moka Pot: All You Need to Know about Moka Pots

Moka pot, also known as Moka Express, is a stovetop espresso maker. It’s like an electric coffee percolator but with more control. Moka pots are easy to use and inexpensive – that’s why they’re one of the most popular ways to make coffee in Europe!

The Moka pot is an old coffee brewing system that’s prevalent in Italian cuisine. Alfonso Bialetti, an Italian engineer who first created the Moka in 1933. The Moka Pot is named after Mocha, Yemen which was one of its staple cities for centuries before it became popularized as coffee elsewhere around Europe and North America.

It was invented to meet the need for making rich and strong caffeine drinks quickly without having any special equipment or knowledge about how they work – just like magic!

How does A Moka Pot work?

The Moka pot is a simple but very effective way to make coffee. It’s all down to basic physics, which explains why you end up with such an excellent cup every time! The three pieces consist of one part water in the bottom chamber next to where your grounds go through their brew process before being extracted from thereby heat and then finally ending as delicious espresso for anyone who drinks it 🙂

It’s designed to be placed on an open flame, usually stovetop but it can also work with other types of heat sources like wood or gas fire pits as well! When water heated in the bottom chamber reaches espresso maker levels, the pressure pushes up through ground beans into the top where they are ready for pouring and enjoying at your leisure.

While it’s true that the Moka pot only produces 1.5 bars of pressure in its chamber, nowhere near what you can achieve with traditional espresso makers (narrowly missing nine bars). But this simplicity of design and ability to make quality cups of coffee made it a hit among households all over!

A French press is a coffee maker that has been around for many years. It’s considered to be the best way to have French Press Coffee because it produces a rich flavor and aroma. A French Press allows you to control how much ground coffee you use, so if you like your coffee on the weaker side, then this is something that could work for you!

The French Press is also known as a cafetière, a coffee plunger. In fact, its history is a fascinating and complicated one. The truth is, there have been several patents for this device with different names and from various origins in order to understand all those bickering behind its creation!

At first, the Frenchmen Mayer and Delforge submitted the patent of its design in 1852. But there was no seal created inside the carafe so definitely, it was not similar to a modern one that you know today.

The first-ever coffee press was patented in the United States by Italian designer Attilio Calimani in1929. The original model underwent several changes through Faliero Bondanini, who patented his own model and started manufacturing them under a french factory margin SA’s brand name “Melior” in 1958.

In 1965, the french press became a hit across Europe after Michael Caine used it in his film “The Ipcress File”. This device’s popularity has grown even more with household names like Bodum and Household Articles Ltd.(a British company), who have helped promote this product as well!

How does A French Press work?

To easily understand how a French press works, you should keep up to date yourself with its body parts. The beaker with base and handle and another part is the lid attached with the filter and plunger.

Beaker is the middle part of a French press that holds water and coffee ground. Usually, it is made with glass however, in the case of some models, plastic, ceramic, and metal are also used in the beaker.

On the other hand, the filter is connected to a metal rod that goes through its lid, mentioned as a plunger. This will be used for pushing down and pressing in on top of your beaker so it has no space between them anymore!

In fact, brewing coffee with a French Press is very simple, just add hot water and pre-measured ground coffee (1:15 ratio) into the beaker and stir it gently using a spoon. Now place the lid on the top and keep it for 4-5 minutes then slowly press down the plunger up to the bottom.

French press or Moka pot? This is a question of personal preference, but there’s nothing like getting into the middle ground and having an enjoyable debate. Let’s compare these two!

A Moka pot is a type of coffee brewer that uses pressure instead of steeping. It can make your cup in about five minutes, but sometimes it takes longer for the perfect drink because there’s no filter or screen like with French press pots to speed things up slightly. While the French press may take slightly longer depending on how long you steep your grounds for.

The Moka pot and French press produce quite different kinds of beverages.  The former creates a strong, sharp beverage that can be mixed with milk or cream to make an energizing cup; while the latter tends towards fuller-bodied brews rich in flavor. But less overpowering than its counterpart on account of using fewer beans at once for more delicate taste sensations.

A French press will give you more control over how strong your coffee is. You can play around with the grind size and steeping time to find out what works best for you.  On the other hand, a Moka pot brews on its own schedule without much say in this matter from users since once figured out that it likes fine grounds – there isn’t going back after finding one’s preferred setting!

French Presses are available in glass or plastic, with some stainless steel models. But Moka pots are typically made of aluminum for lighter weight but they can also come as heavy-duty durable steels that will work overtime depending on your needs!

In a nutshell French Press Vs Moka Pot

So, Which One is Better for You Moka Pot Vs French Press?

When it comes to choosing between a Moka pot and a French press, there are two very different types of coffees. If you prefer espresso-like or espresso-based brews then the choice should be an easy one for those who enjoy strong coffee with lots of body in their cup. The Mokas appetizing aroma will fill your senses as well!

If you are looking for the strongest, most flavorful cup of joe then your best bet is with a French press. It will give a full-bodied flavor that’s among some of the strongest around with any method – not just pour-over or Chemex!

It’s true that you don’t know which of the two would work best for your needs until trying them out. You can buy both as they are not expensive, and if possible then it is better to have more than one so every situation has its own tool on hand!

What is the perfect coffee water ratio for a French press?

Is Moka pot and French press the same?

Ans: Not exactly, Moka pots and French presses are two very different brewing techniques for making coffee. The Moka pot creates strong, sharp brews that mix well with milk or cream; whereas the French style tends to be fuller-bodied and rich textured due to its steeping technique which produces more nuanced flavors when compared side by side.

Ans: The French Press is often cast as the unhealthy way to brew coffee because its metal filter doesn’t filter out cafestol. Cafestol can cause LDL or bad cholesterol levels to increase in your bloodstream and lead you down a path towards developing cardiovascular disease or diabetes. But this problem has been solved by using paper filters when making with a cup at home instead!

Both the French Press and Moka Pot are great coffee brewing methods. The decision of which one to use is based on your preference (budget, taste preferences, time constraints, clean-up needs), and how much you want to be in control over the flavor profile.

After reviewing the two types of coffee makers, it is clear that there are benefits and drawbacks to both. The French Press seems best for those who want a stronger brew with more flavor options while the Moka Pot offers quick brewing time without sacrificing quality. Ultimately, you will have to weigh your preferences against each other when deciding which type of brewer is right for you!

Which one do you prefer? Let me know!

You May Also Read: French Press Vs Percolator