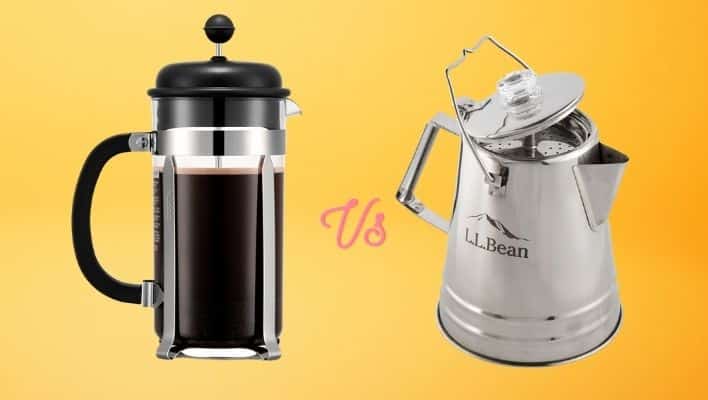 Both the French press and percolators are probably your best bets if you’re searching for the most basic way to prepare coffee. Because these methods do not necessitate the purchase of special equipment, they will be less expensive than any other form of brewer available! You can also choose which way is best for you based on how fancy or simple you want.

Some may argue that one approach is superior to the other, but the truth is that both have their advantages and are excellent ways to prepare coffee at home. Many people know the differences between the French Press Vs Percolator, but few are aware of which is the better option for them.

I’ll provide you with all of the information you require to make an informed decision about which option is best for you.

What is a French Press, History, And How Does It Work?

A French press is a coffee brewing method where needs to experience firsthand to appreciate it. It’s a Carafe with an open top and a plunger and filter. It is a centuries-old brewing process used in Italy since 1929, commonly known as a Cafetiere or coffee pot for short.  It’s particularly popular with Europeans and Americans these days, who like their daily cup of joe from this distinctive sort of machine!

The French press is a coffee brewing process that involves combining hot water with ground beans to produce an oily, thick, and full-bodied drink. It works on the piston principle, in which ground beans are boiled in hot water before being strained through them to extract oils and leave their excellent flavor characteristic in the finished drink!

Mayer and Delforge, two French inventors who were pioneers of the French press, initially patented it in 1852. In 1929, an Italian designer named Attilio Calimani submitted a patent for a French press. Later that year, in 1958, he tweaked the design even more and began mass production at a French clarinet manufacturer. It became well-known after appearing in the 1965 film The Ipcress File. The French Press was then popularized throughout Europe by a British company and a Danish company, BODUM.

Modern French presses resemble a cylindrical beaker made of metal, plastic, or glass. It comes with a lid and a plunger with a steel mesh or nylon filter firmly attached inside the beaker.

How does It work?

It’s a straightforward method for brewing a fantastic cup of coffee. To begin, pour caffeinated grounds into the beaker/carafe. After that, add hot water and soak for 5 to 6 minutes. Push down the plunger when the steeping process is complete; this will separate the grounds from the coffee and result in a delightful, refreshing beverage!

What Type of Coffee or Grind Size is best for French Press?

There are no special coffees to use with a French press. It all comes down to personal preference and what you enjoy in your cup, but the grind size might help determine which one tastes better for you!

Coarse grinds work best in French press because they never slip through the filter and don’t end up as sludge in your mug. Larger coffee grinds release more liquid throughout the brewing process without the over-extraction or astringent flavor, known for finer grounds.

What is a Coffee Percolator, History, And How Does It Work?

It’s a coffee brewing device that cycles boiling or nearly-boiling liquid through the grounds until the appropriate strength is achieved. Because it extracts more flavors than an automatic drip maker, it’s an easy and effective way to make your favorite beverage. Despite compromising anything you could notice after drinking several cups at once, this gadget can eliminate some of the volatile components in beans and give off a great aroma with its rich flavor intact.

Count Rumford, a British physicist of American descent, invented the coffee percolator. He is also known for his considerable military services and dislike of tea and alcohol, which inspired him to create this revolutionary coffee pot between 1810 and 1814! This model, however, is no longer relevant in today’s world.

On August 13, 1889, an Illinois farmer named Hanson Goodrich was given the patent for the modern-day stovetop coffee percolator. The essential components: a broad base, central tube, and a porous basket suspended from it. Goodrich’s concept has the potential to turn any ordinary coffee pot into a stovetop percolator. Patents issued after then haven’t added anything.

According to legend, Russell Hobbs, a British manufacturer, invented the world’s first electric coffee percolator in 1952. It has, however, been in production since at least 1920, and the automatic version has been available since at least 1940.

Here’s how it works:

A coffee percolator consists of a pot with a small chamber at the bottom, placed close to the heat source. A vertical tube leads from this chamber to the top of the device. A perforated chamber lies just beneath the tube’s upper end.

In the beginning, the water chamber of the pot must be filled with the requisite amount of water, followed by the coarse ground coffee in the upper chamber. Make sure the water level is far below the upper coffee chamber at all times.

What Type of Coffee or Grind Size is best for Percolator?

Finely ground coffee in percolator brewing always produces acidic and bitter-tasting coffee. On the other hand, extra coarse ground coffee weakens the coffee, which is the complete opposite. So which is the right coffee grind size for the Percolator?

For best results, use coarse ground coffee, as it will never fall into the coffee below through the holes in the bottom of the coffee basket. If you use finely ground coffee, you will always get coffee with awkward taste and sediment.

Coarse ground coffee can avoid contact with water which helps to keep the coffee free from bitter taste by preventing excessive drainage.

French Press Vs Percolator: Which One You Should Choose?

If you’re hesitant or afraid to use a percolator to prepare coffee, you won’t notice much of a difference between French Press and Percolator. However, I will provide some examples so that you may quickly select the appropriate way.

Due to the simplicity of the French press, it is trendy and user-friendly. It takes less time to make coffee than any other manual coffee brewer. However, you need to pay special attention to the grind size, water temperature, and steeping time to make the ideal coffee. Otherwise, if it is left steeping for a long time, the taste of the coffee may become bitter.

On the other hand, in the case of a manual percolator, you have to pay a little attention to the grind size and time. However, it is easier to make coffee with a modern electric percolator because the coffee automatically goes into keep warm mode when it is ready.

Both brewers are simple to clean and maintain. But cleaning the Percolator is a little more difficult because the brewer must ensure that the vertical tube and the coffee basket are free of any coffee ground residue.

Because both brewing processes have advantages and disadvantages, there may be a tie between the two for the time being.

It’s common knowledge that every step of the French press brewing can be tweaked. You can adjust the strength of your coffee at any point during the brewing process.

It’s an entire immersion coffee brewing method, so you have complete control over how much coffee ground will be in contact with the water. Moreover, you also have control over the water temperature, water and coffee ratio, and time. Only You cannot use finer coffee grounds in French press brewing. Otherwise, you will have to drink coffee with sediment.

Many people believe that brewing coffee with a manual percolator may be very controlled, but this is not the case. You may adjust the temperature by moving it up or down from the heat source, but watching the brewing process from outside isn’t easy. Besides, you have very little control when using an automatic or electric percolator. In addition to preparing coffee, it may also be used to boil water if you don’t have a kettle.

In terms of versatility, a French press is the best because you can tweak every step of the french press brewing process and customize the taste of your coffee to your liking.

Brewing time is one of the most important aspects for busy coffee drinkers who prepare their own coffee. Their preferred method is one that produces full-flavored coffee in a short period of time.

A French press takes a maximum of 5 minutes to make coffee from start to finish. At the beginning of this process, it takes some time for the water to boil and after adding water to the coffee ground it takes at least 4 minutes to keep it steep. Although this time is not precisely fixed, it is possible to reduce or increase it as needed.

When it comes to brewing time, the French press wins because it is unrivaled to produce a full-bodied coffee in less time and less effort. If you use an electric percolator, the brewing time will not change significantly, but the stovetop will take longer.

The most pleasing way to make full-bodied coffee is to use a French Press Brewer, which is well-known. Instead of a paper filter, this device uses a steel filter, which allows all of the essential oils in the coffee grounds to flow directly into the cup, resulting in a perfectly flavored cup of coffee. It’s not as strong as percolator coffee, but it’s still good.

One of the negative aspects of a percolator is that it can sometimes generate bitter coffee. But, can a percolator produce a rich cup of coffee? If you have a good understanding of the recipe, you can make unique, rich, and superb flavored coffee with it.

Most French press coffee machines aren’t overly large or hefty. Steel, glass, and ceramic are used to build it. The biggest issue is that it requires separate boiling water to prepare coffee, making it unsuitable for usage while camping, traveling, or on the go. If your French press is made of glass or ceramic, you must handle it with extreme caution; otherwise, it may break.

The Percolator was invented as a stovetop which is still widely used. It can be heated anywhere on any heat source. It is usually made of steel or aluminum, so it is light in weight and durable, so you can carry it without any hassle. So there is no pair of stovetop percolators to make quick coffee at camping.

In this comparison, the Stovetop percolator outperforms the French press, especially when camping.

At a Glance French Press Vs Percolator

As a coffee aficionado, I prefer the French press because I appreciate the rustic flavor of coffee! Many coffee enthusiasts may disagree with me; however, percolators may be really effective when used by a trained professional!

Finally, if I had to choose between the French Press vs Percolator, which would I choose?

It’ll entirely depend on what you want in your coffee! If you want a large volume of coffee and a strong cup simultaneously, a percolator is the way to go.

The French Press will be your best bet if you want a tiny, full-flavored coffee in less time. Thank you so much for taking the time to read the entire article. Your insightful comments will help me improve my writing in the future.